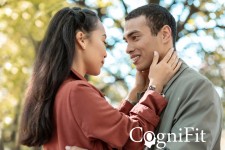 - Falling in love can produce very intense cognitive and effective changes - Love modifies certain brain's chemicals, such as hormones and neurotransmitters - CogniFit expert distinguishes 4 consequences that love has on our brain

NEW YORK, February 14, 2019 (Newswire.com) - Falling in love can be a thrilling and amazing experience. It is associated with very intense cognitive and affective changes such as euphoria, joy, arousal and even obsessional thoughts about the significant other. Human brains are wired to long a connection with others. This explains why humans experience loneliness and rejection as threats to survival. Several studies have shown that people in love tend to mirror each other’s facial expressions and gestures. Steenbergen et al. (2014) discovered an association between passionate love and less cognitive control. Specifically in cognitive functions, such as attention memory, language comprehension, and emotional processing. This proves that being in-love can affect how the brain functions and how it processes this sought out emotion.

A world leader in neuropsychological testing, brain training, and cognitive stimulation, for the past 20 years, CogniFit has been working to optimize brain function and train over 20 different cognitive skills. Neuropsychologists at CogniFit share the importance of emotions on cognitive skills and how strong emotions such as love can affect the brain.

Estefanía Egea, a clinical psychologist at CogniFit, says “it is important to know the changes that love produces in our brain because this will ultimately modify our behavior. When we are in love, we tend to spend more time with the person object of our affection, and we increase our intimacy. Viewed in these terms, love is an evolutionary mechanism that favors the survival of our species. Since love has such an important function, it is logical that it has the ability to modify various parts of our brain to achieve its purpose. Mainly we could distinguish 4 consequences that love has on our brain.”

Love can, therefore, affect your brain in multiple ways. Seeing as brain functions are highly related to cognitive skills, it is important to keep them trained and at an optimal level in order to not lose cognitive control.